‘Have you done London?’ is a very common question that non-runners ask when you tell them that you run. When the answer is no, you get the feeling that they’re not very impressed.

‘But I have run lots of trail marathons and ultras’, you say.

‘Meh’, might not be the actual response but it might as well be as their eyes glaze over and they start losing interest. Those races aren’t on telly every year and there are no famous people there, so are they really proper running?!

This has never bothered me. I don’t need people that don’t know about trail running to be impressed with my achievements but it has made me wonder what the big deal is about London. This last couple of years, coaching people who have run London and adore it, my interest piqued and I decided I should try to get in. The ballot is risky, and can take years so my thinking was that I should be able to get a good for age place. At 3.50, it seemed very doable.

My first and only road marathon was Edinburgh in 2012 when I was a running club newbie and wanted to do everything, all at once. It was a good experience but I finished in pain and deflated, nothing like the tearful elation I had felt after my first Yorkshire Three Peaks race. So, knowing that Edinburgh was a fast course and had great support, I entered in May this year. Unfortunately, I had a foot issue that forced me to bin it, and with a busy year ahead, Chester in October was my last chance.

I’d be lying if I said I didn’t train for it but I’d also be lying if I said I gave that training 100% of my sole focus. For a good 5 weeks of that time we were in the Alps, so I dutifully did my sessions – mile reps, tempo efforts and marathon pace efforts in longer runs – but they were on hard packed trail, not road, and I was also doing lots of lovely long hikes in the mountains. I have never enjoyed running long on the tarmac. My body hates it and my gait means that the repetitive pounding can set off my ITB which, with its undulation and varied terrain, trail running doesn’t do anymore. So I avoided any long tarmac runs, just doing two when we got home. It all felt good though, and I did feel ready to go and give it my best to achieve my goal of 3.30 on the day, hopefully a time which would guarantee a London place.

Saturday morning rolled around and I felt the familiar pangs in my lower abdomen: my Little Friend was coming that day. She showed herself by the afternoon, just enough to warrant a hot water bottle in my jeans on the drive down to Chester. I have run races on my period before and there are worse things, but she is unpredictable and when I have to work hard, can be troublesome. I spend a good portion of time telling the women that I coach that they should take it easy in the few days before and the first few days of their period: for most of us, it is not the time to push hard, to lift heavy or to do anything that takes much energy. One, it feels extra hard and two, it doesn’t have as much training effect. It is a time to really pay attention to your signals, to conserve energy and not to be a hero. So not a good time to try and run a hard marathon really! For me, I can usually hit paces if I need to but it feels that bit harder and takes that bit more out of me. I am a ferocious hydrater anyway, but on my period, I need more fluid, I sweat more and more saltily. My temperature regulation is also pretty poor: I heat up much quicker and get more uncomfortable in heat. The last thing is often the least pleasant. Your smooth muscle gets more relaxed in this time which can mean easier transit of any excretions. In real terms, your stomach can go when you really don’t need it to. This has been a problem for me in the past in races and I have had to resort to Imodium and peeing in full view of people. So going into a road marathon, this could have been very, very ugly. What can you do though? I was going to give it full bore and deal with the consequences.

You’ll be glad to know that you don’t have to read about any toilet issues from now on. That side of things went really well, with Veloforte gels and chews going down very easily and staying down. Everything else though did affect my race. We set off at a good lick, I was just behind the 3.30 pacer and quickly overtook him as we headed through the town. The pace felt comfortable and smooth and I was confident that I could keep it going. It stayed that way until about halfway. With the race being in October, I had assumed it would probably be mild maybe even with a bit of lovely drizzle. Once we got out onto the country roads and reached a turning point at around 14 miles though, the sun was high and shining directly on us. Coupled with my Little Friend burning up my insides, it all became a bit too much and I had two dizzy spells. The first one was resolved with a short walk break but the second really made my head spin, so  much so that I had visions of passing out. I tottered to the side of the road and actually sat on the kerb, my time goal starting to ebb away. But I needed it. A couple of people asked if I was okay and it brought me round enough to get up and keep moving. Two men were sitting on deck chairs next to a marshal’s car, also clearly struggling and so I leaned on it for a second, while they offered me gels and water.

‘I could do with some coke’, I said, half hoping he had a random can in his car somewhere.

‘I’ve got jelly babies’, he replied. How could road runners not know about coke??

I started running again, doing some very slow maths and trying to work out how much time I was losing. When I was running, the pace was there, it just felt so leaden. My hips and legs were like concrete, another side effect, and I knew that I just had to focus on finishing it in under 3.50. Thoughts of stopping did crop up. If this was so hard, why would I want to do another one? I shuffled on.

At mile 20, I actually got a second wind. I felt strong, I was overtaking more people and I could see how much more they were hurting than me. This was what I did, I told myself, this is where you come alive, when it gets hard and when others start to suffer. That lasted all of five minutes then I was a wreck again, now feeling the old familiar rock like sensation in my right quad and ITB that I used to get when I ran roads years ago. I was so thirsty and hot too. Every water station that appeared, I grabbed a small bottle, filling my soft flask and pouring the rest over my neck. It was maybe only 15 degrees but I was completely sodden with sweat, even getting some thigh chafing. I have run in 30 degrees and been more comfortable! In the last few miles, the support was great, with people lining the streets, banging pans and misting us with water sprays. Every incline was walked now and I had lost all the power in my right leg. There was a blister on my left foot too, but it didn’t feel bad, I just cursed my dodgy feet and ground it out. 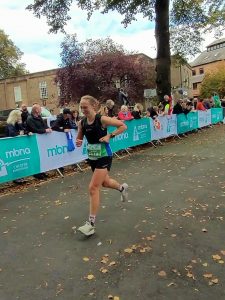 If you don’t look like this at the end, did you really do it right?!

The last stretch was admittedly a real boost and helped me to push as much as I could. We ran along the river bank, with crowds of people shouting us in and when I saw the 400m to go sign, I did what I could. My head was doing a Paula Radcliffe bob and I was grimacing as I drove my arms hard. Jayson filmed my last few seconds and you can see the lack of push in my right leg, but also the work I was putting in. I crossed the line in 3.37.23 for a very tiny PB but one that I think I will keep as I can’t see me doing that again!

Much respect to anyone that trains for a marathon time and really pushes their limits, as it is probably the hardest thing you can do. I know that running 50 or 100 miles on trails is tough and has its own challenges, but to me, putting yourself through those hard, fast road miles is tougher. When you are going for a fast marathon, you really are riding the line and it is a wholly different sport. Hopefully, my time will be good enough for a London place, and I plan on spending the weekend jollying around in a silly costume, taking in the atmosphere and not looking at my beeping watch every minute. A lot of the issues I had on the day were to do with my period, but I also think that If I had put in more time on the road, my body might have coped a little better. Am I willing to spend more time on tarmac to drive my marathon PB down to what I think I am capable of? Right now, absolutely not. I enjoy working hard but I enjoy doing it on terrain that doesn’t feel like it’s grinding me to a paste. This was a very good marathon: really well organised, easy to get to, a nice route and a very friendly atmosphere. I am glad that I did it and tested myself like this, just to see if my feelings had changed in the last decade. But, it’s just not my cup of tea. Or should that be cup of flat coke!

When the red mist clears.