These are a brand new shoe from Scott and as well as looking pretty bling, they have a lot to offer anyone looking for a shoe that will go all day and not leave your feet feeling pounded at the end of it. Before getting too carried away I should say that I am sponsored by Scott so could appear slightly biased, however I won’t say anything about a piece of kit I don`t believe to be true or had no experience of using myself. Of course there are plenty of other great shoes out there: I have used and run in pretty much anything going and it really is horses for courses as far as shoes. I had a favourite shoe 3 years ago and didn’t think anything would ever be better, then guess what? I tried something new and it was even better. Shoes keep evolving, technology improves and we also change.

To be completely up front I wasn’t really in a rush to try the new Supertrac Ultra RC shoe, not because I didn’t like them or want to see what everyone seemed to be shouting about, but mainly because up until this point I have been so smitten with the original Supertrac RCs (STRC) since getting my hands on a pair in November 2016 (Original video review here). Since then I have used them for every day road and trail training, from 5k park runs to mountain ultra races such as the Transvulcania and also the Lakeland 100. They are a very versatile shoe which seemed to last well and feel great on all sorts of terrain. So where on earth does this leave the Ultra version?

It maybe worth explaining the difference between the two a little. The original RC shoe was primarily designed as a high performance race shoe, lightweight and relatively low drop, (5mm) robust and very good fitting, (for my feet anyway) awesome grip on a wide mix of surfaces and also when being dragged down hills by our very excitable dog. It is a great race shoe and really lets you get your teeth into the trail. As an all day fit and forget shoe it doesn’t quite offer as much protection and comfort as the ever faithful Kinabalu Supertrac. Though as much as the Kinabalu is such a comfy shoe, there is a bit of a weight penalty especially when wet – again a great training shoe but not quite high performance. So along comes the Supertrac RC Ultra, with a very similar design and tread pattern as the STRC but extra high and cushioned, plus using some very high tech material on the uppers. It seems to tick the boxes needed for some longer days in rough terrain and also keeping the weight down especially when wet. 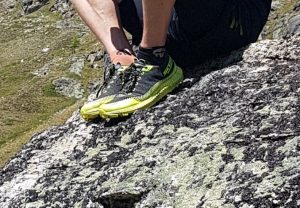 But don’t be fooled, Scott haven’t just added some foam and thrown the shoe out there, there has been some serious work and development put into this shoe. With a 7mm deep lug they offer plenty of grip and also use a rather cool looking diamond pattern in the sole bed to help shed mud and sheep poo. The lugs are also specifically laid out to offer good stability on hard ground as well as in the soft and loose dirt or mud. The uppers use a special Schoeller Dynamic fabric, which is basically water resistant, breathable and hard wearing, then supported with a row around the edge of the shoe for extra protection. Plenty of testing and development work went into these between athletes and designers with comfort being one of the key factors.

We were lucky enough to have some time in the Alps over the summer so I managed to get plenty of running in them out there, as well as back in the UK on the moors and trails so have now had a good variety of terrain and conditions to put them through their paces.

Out on test, once I had pried off my STRCs, I was pleasantly surprised how comfy the Ultra is, that being said they are a slightly smaller size/tighter fit than the STRC so I would go 1/2 size up next time, or even a whole size up in winter if I want to wear a thicker sock. However, after a couple of runs they seemed to ease off  and I got the lacing about right so no problems there. The extra cushioning was certainly apparent and I found that being out for a few hours in rocky rough Alpine terrain left my feet feeling pretty good. The extra heel to toe drop was a bit noticeable at first (these are 8mm) but I am fairly well attuned to any changes in this. A few long days out and I started to get into the shoe more. 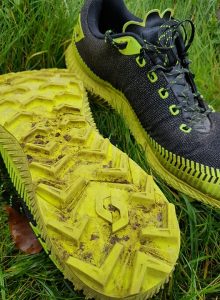 The feel is obviously going to be different to a lower drop less cushioned shoe, not so much in a unstable way to be honest but almost like I could be a little more careless about where I was putting my feet. The Ultras seemed to take everything in their stride a bit more, I could plough across and through things I may have previously been a little more cautious about. A bit like putting a fatter tyre or suspension on your bike, you just get away with things a bit more. Grip wise they are very solid and dig into everything I have thrown at them so far. They certainly hold their own on wet slippy and boggy surfaces, though obviously not as much as a deep lugged mud specific tread, but in the grand scheme of things there isn’t a great deal in it, especially when you consider the trade off and the fact they transition well onto rocks, hard packed trail and if you are unlucky enough to end up on the stuff, even tarmac!

The fancy fabric works really well, keeping the water out while running through wet mud and puddles. Having been back in the UK for a few weeks now and into some long days out on the moors preparing for the Spine in January and carrying a relatively larger pack and more weight, they have been spot on in the wet and mud. Getting them in deeper ankle to shin deep water and fully saturated I have been really pleased to see how quickly they drained. Rather than retaining water and becoming a pair of heavy wet sponges, they soon return to a reasonable state of non squelchiness, so perfect for the long days I have planned out on the Pennine way through the winter. 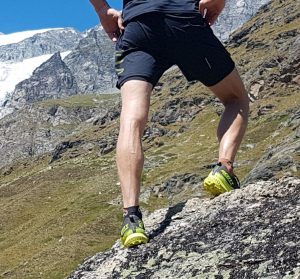 Overall for me personally they absolutely have a place in my running; the solid grip and sturdy construction mean they should keep on giving for a while yet. Having done a good 30-40 hours or so in them so far they barely look used or worn anywhere so I expect them to last a while longer yet.  I think if I was doing the LL100 or any other race over 30-40 miles I would go for these for sure and all being well will be my first choice on the Spine race come January, plus the long days out planned in the build up. If you are looking for a ultra/long distance specific shoe then they are well worth trying, I think they will last really well, while taking care of your feet in a huge variety of terrain. 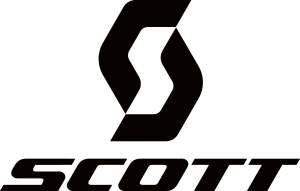 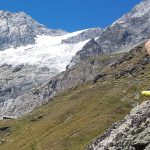 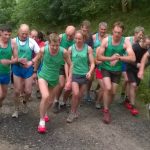