The Cleveland way relay is a team event which covers the whole route of the 110 mile Cleveland way, the route being broken up into legs, where each runner covers a distance ranging between 4 and 9 miles, with 16 legs in total. Teams start at 5 am in Filey and keep going until the end in Helmsley, there is another mass start about 70 miles into the route at 2pm whereby all the teams not already past that point start together again, this just ensures the route can be completed by everyone in daylight hours and makes things a little easier logistically. 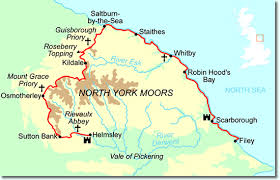 This year I somehow ended up organising two teams, one for Pickering Running Club and the other a mixture of Hardmoor`s friends and Ultra Runner Trail Team members , Team H.U.R.T.T (Hardmoors Ultra Runner Trail Team). Pickering have had a team involved and myself over the past two years which have always been great fun.  With plenty of interest from friends in the Hardmoors community it seemed like a great opportunity to get another new team involved. 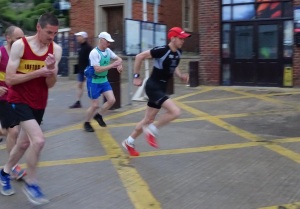 “Awarding” myself the first leg for team H.U.R.T.T which was a 5am mass start, I also “awarded” Kim the second leg from Scarborough, deciding at last minute to camp out in Filey to give us a lie in! (I could not face giving someone else the 5am start!) though Jack (The dog) had other ideas of a good night sleep and I ended up walking him along the very empty beach at 2am, not really in the plan but it was nice and peaceful! Getting up a couple of hours later I felt surprisingly good for that time of day, we gathered for the first “start” on the cobble landing and were soon set off by Martin Dietrich, heading off along the sand in Filey, I was feeling quite awake and comfortable as we headed out along the coast with some early morning drizzle to wake up to. Running a bit quicker than expected I finished the first leg a couple of minutes ahead of schedule and also the next runner in from the Loftus team, though Kim had been having a quick Reece of her route through town so I had to wait a couple of minutes for her to get back and handover too, she soon got going though and zoomed off like a bullet now in second place!

Bob Horseman handing over to Rich “The Rocket” Buckle

The rest of the day became a repeat of handover`s and runners speeding off, as Richard demonstrates in the picture above! the energy at each handover point where everyone gathered was fantastic! Having supported people around the whole route on other various races such as the Hardmoors 110, it was amazing to see how much quicker the distance was covered by people running short sections flat out – like doing HM110 support in fast forward!! Kim was enjoying the speedwork so much she even did a second leg for Pickering in the afternoon!

Kim in full X-Bionic gear, speeding in to finish her first of two legs

Throughout the day I was inspired by  just how much everyone was putting into their individual legs and doing their best to put together a fast pace, the individual logistics of this type of event are often as challenging as the actual run itself, but everyone just got on with it, some happy running back along the way they came for some extra mileage, It really was a great team spirit throughout the day, luckily the weather was much nicer than forecast  and everyone was happy to be hanging out waiting for their handovers, despite my dodgy leg time estimations! 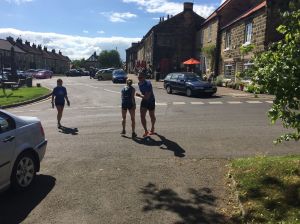 The man of Steele! taking over from Pam in Osmotherly

I really enjoyed the idea that this is a team event, everyone does their bit and it all adds up to covering a very long distance in a short amount of time, a fantastic day and really good atmosphere around the route. Next year it would be great to have two team H.U.R.T.T`s  a A and B team as so many people wanted to be involved, there would easily be enough for two teams. As Martin says in his report below, maybe a team to challenge Loftus all the way around would be good!

Not a bad way to fill a Sunday!

A huge thanks to everyone who took part from all teams involved to the behind the scenes supporters driving everyone around too, especially those who jumped in at last minute. A special mention to Jerry for driving up from Lincolnshire to do a leg for PRC.  Mostly a massive thanks to Martin Dietrich for organising this event.

Here is Martins report and the results;

I may even get Rosedale Marathon written up soon too!!! Cheers Jayson 🙂