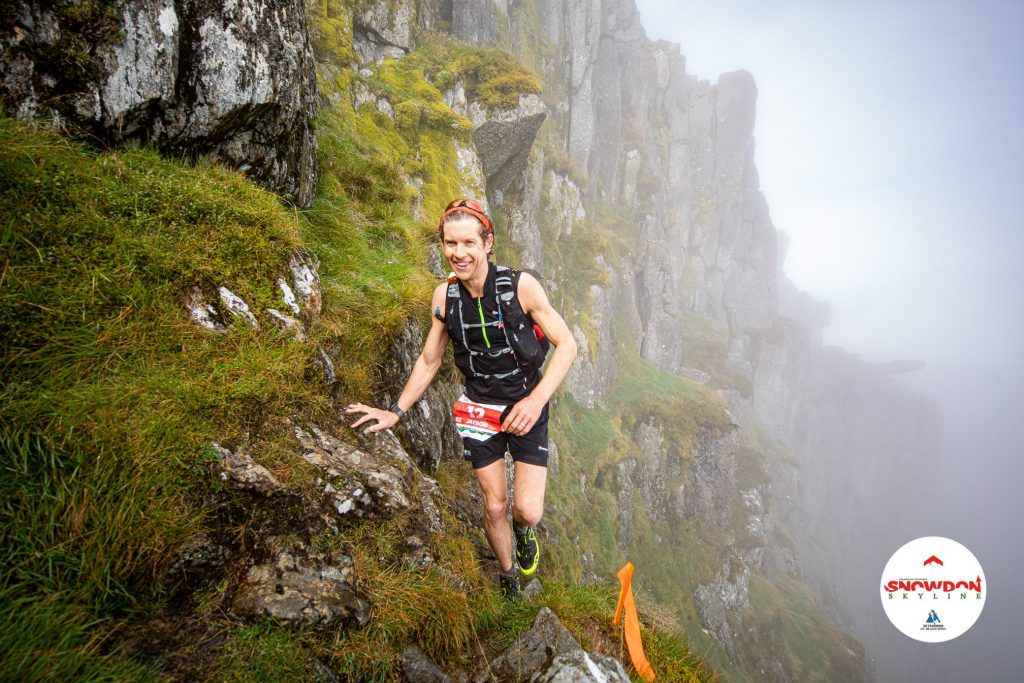 You know you are doing an epic race when so much of it is spent climbing and scrambling past Welsh mountain goats!

Following a 6 week break from anything resembling training I knew my fitness was lacking but the lure of such a technical and exciting route combined with some arm twisting pulled me in like the sucker I am, last weekend I found myself in Nant Gwynant for not one but two races up and around the Snowdon mountain range for the inaugural Snowdon Skyline race part of the Uk and Ireland Skyrunning series: as the T shirt says, Y Liwedd, Y Gribin, Tryfan & Crib Goch. These are all spicy climbs and scrambles to do, along with the damp and wet conditions this audacious route really got the adrenaline pumping.

The intent for me was to go for fun and kick off a winter of less competitive adventures, with an eye on a build up for January, so I decided to go all in by doing both the vertical kilometre on Saturday afternoon, a 1000 m uphill only race to the top of Snowdon followed by the main course on Sunday of 22 miles and over 4000m of climbing, on paper a hard enough route but the hidden gems were in the detail. 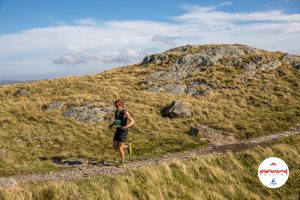 A blessed sunny day for the Vertical kilometer!

Pushing and blowing out the cobwebs with the vertical kilometre, we summited Snowdon on Saturday afternoon. It was a great start and a treat with clear skies and sunshine all the way. Setting the scene for the weekend with a well-marked (courtesy of Beth Pascall and her partner Matt) and varied route of trail, open mountain and welcome rocky sections, I was pleasantly surprised with how much support and local enthusiasm there was for this event and the theme continued through the whole weekend (Remembering one very enthusiastic Marshall on Sunday standing tall on a distant ridge, hammering a cow bell with music blasting!) Along with fellow Cavill coaching athlete and team mate Haydn Williams (who finished 6th!) We took the chance to return via a slightly more technical descent, I had to keep myself in check and remember what was to come the following day.

In the evening I was humbled to share a Q&A session with Beth, where Mike was an excellent host. With some great questions and a kind audience it was a lot of fun and informal conversational chat, plus a brilliant opportunity to find out more about Beth’s amazing races and results this year, certainly inspiring me to keep the Western states 100 in my long-term goal plans! 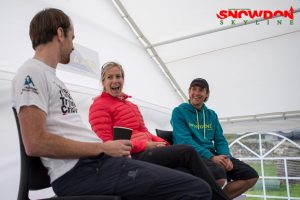 Super fun on stage with these two awesome people

Sunday morning soon came around; the weather was misty and some drizzle with rain early on, then drying off later, greasy rock and intermittent low visibility adding to the challenge. After settling in on the first climb I was happy to put my ego in a box and enjoy a more relaxed day of mountain fun, not pushing on the climbs and playing on the descents was the aim.

The day turned into a total treat and I was like a kid playing solo pass the parcel; every section of the course unwrapped some new layer of excitement, challenge and adventure. The mist seemed to add to this and you had to be extra vigilant in picking out route markers but every now and then it would clear, rewarding us with a spectacular view of mountains begging to be climbed. 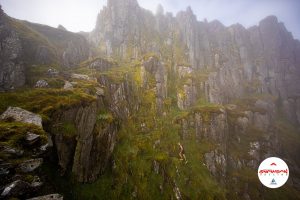 No path, just a few flags, goats and abundance of fun!

I was completely buzzing following a descent down Y Gribin to the second checkpoint where the real fun started as we negotiated the boulder field and ascended the North face of Tryfan. For me this set the scene for one of the best UK Sky races and arguably one of the most technical races in the UK and beyond. Although some elements on paper may not be graded as high as the Aonach Eagach ridge used in the Glencoe skyline, it was the sheer volume and relentless technical climb downs and ups that gave this race more in terms of ear to ear grinning and heart stopping drops and the requirement to think about what you are doing with feet and also hands. In my view greasy and mist shrouded Crib Goch after five hours or so of pounding up and down was far more intimidating than the Aonach Eagach ridge which I feel is a different challenge in its own right. 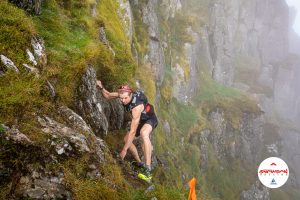 Trying desperately to make this look way harder than it probably was!

Spending the later part of the race with Chris Webb was great and the company over Crib Goch and the Garnedd Ugain ridge most welcome, with the mist it felt never ending and to Michael’s credit wherever the was an option to go over or down a technical ridge this is where you were sent.

The grand finale was a run back down the South ridge of Snowdon and the Watkin trail which we climbed up on the Vk the day before. I was extremely happy to still be feeling strong and nicely warmed into technical descending so it was absolute bliss to really let my legs go down here, feeling total flow and joy the end came far too quickly, suddenly it was back down to ground level and the end to what had been some of the most fun I have had in a race. 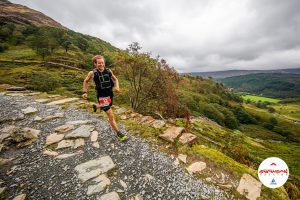 Thanks to Snowdon skyline and all the team for great photos

It was great to hang out with some brilliant people and I was super pleased Damien and Sarah both took the win having focused their efforts on the UK series this year, both rewarded with a place at Limone in the Skyrunning world masters race.  Total credit to Mike and his fantastic team of help and support for putting on such a bold and well organised event, utterly deserved place as a Skyrunning event, not for the faint hearted, an absolute class weekend which I really hope happens again.

Kit wise I used my tried and tested combo of my Montane Geko pack which is nice and light yet very comfortable and stable. With plenty of easily accessible pockets to store mandatory kit, lots of food and water it was the perfect vest for the day. Only needing to put my Minimus stretch jacket on over the top of everything briefly when we had some rain and exposure on the Glyders, it went quickly back into one of the handy side pockets while still being able to keep moving and negotiate the trail. 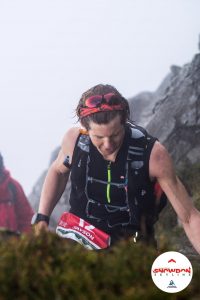 I had partly considered using poles and tested them out on the VK the day before, but felt as there was so much technical running they would be more of a hindrance than benefit – the right choice in the end.

My favourite shoe and treating myself to a brand new pair out of the box on Saturday the Scott Supertrack RC`s were spot on for the day, despite the greasy rock they dealt with the conditions really well. Continuing my record of three big races in a row with zero blisters (missing toe nails are another issue!)

Nutrition was a mixed bag and the more relaxed approach meant a chance to try a few different things. With a combination of “real food” type gels and those with Maltodextrin. I noticed how different I felt following each, yet mostly enjoyed munching real food including Chia charge flap jacks. Also picking from the brilliant checkpoint food; fruit and sandwiches plus the odd cup of Poblado coffee. There also seemed to be a few people handing out jelly beans on route which were really nice, I also learnt to rinse my hands first as these combined with the taste of goat wee from the “hands on” scramble of Tryfan was a slightly unpleasant combination!

Even when her legs were off, she fought on her stumps. 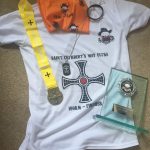 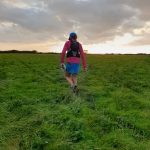